As we highlighted in a post this morning, today marks the thirteen-year anniversary of the 2009 market bottom of the Global Financial Crisis. Since then, the equity market has roared to the upside, rallying 531% (not including dividend) as of yesterday’s close, which constitutes annualized returns of 15%.

As expected, sector performance has been uneven. Technology has led the way to the upside, rising more than 11-fold and booking an annualized return of 21.5%. The Consumer Discretionary sector comes in second, with price appreciation of 923.3% and an annualized return of 19.6%. Energy has been the worst-performing sector, returning just 88.7%, which is an annualized gain of 5.0%. Telecommunication Services is the second-worst, gaining 147.4% (7.2% annualized). Again, all of these returns do not include dividends.

Turning to individual equities, the tables below highlight the thirteen best and worst-performing current members of the S&P 500 since the March 2009 lows.  For each stock, we also include how the stock performed during the crisis (10/7/07 through 3/9/09).  Starting with the winners, all but two of them fell more than 50% during the crisis with United Rentals (URI) falling more than 90%!  All of these stocks have made up for those losses, though, with three rising more than 10,000% (an increase of 100X) over the last thirteen years. Of the current S&P 500 members, DexCom (DXCM) is the best performer in terms of price appreciation, booking an annualized return of 44.1%. NVIDIA (NVDA) and United Rentals (URI) have gained 42.9% and 42.8% annualized, respectively.  Apple (AAPL) was already a large company in 2009, but its 35.7% annualized return moved it to the top of the charts in terms of the world’s largest companies. 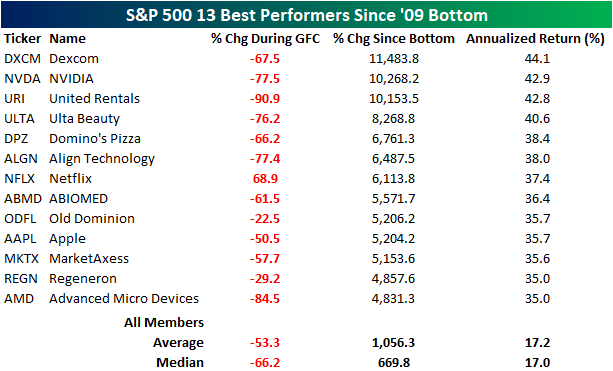 There are only four current S&P 500 members that have seen negative price action since the bottom of the Global Financial Crisis, with those being Lumen Technologies (LUMN), APA (APA), Viatris (VTRS), and Carnival (CCL). The median annualized return of these names is a loss of 1.8 percent, not including dividends. Just to put this in perspective, only 11 of the 500 names currently in the S&P 500 have performed worse than the current 10-year treasury yield.  The only one of these that is higher now than it was at the October 2007 peak is People’s United (PBCT). Click here to view Bespoke’s premium membership options. 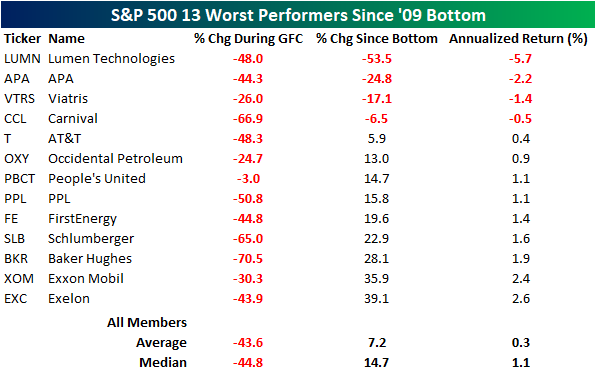