The table below shows the total returns of various asset classes over the last twelve months, three years, and five years using key ETFs traded on US exchanges.

Internationally, no country ETF in our matrix comes close to the 67.93% gain that the S&P 500 (SPY) has seen over the last five years.  Russia (RSX) has been the best of the country ETFs over the five-year time frame with a gain of 42.13%, while France (EWQ), Japan (EWJ), and China (ASHR) rank second through fourth with gains between 38-40%.  Mexico (EWW) and Spain (EWP) are both down over the last five years, while countries like the UK (EWU) and Canada (EWC) are only up by single-digit percentage points.

Over the last year, it’s a slightly different story with three countries (China, Italy, Russia) outperforming the S&P 500’s 18.27% gain.  Spain (EWP) has been the weakest country over the last year gaining just 2.11%.

Finally, fixed income ETFs have posted very strong returns given their risk averse characteristics.  The widely followed 20+ Year Treasury ETF (TLT) is up 22.97% over the last 12 months, which is 4.7 percentage points better than the S&P 500 over the same time frame!  Sign up for Bespoke’s “2020” special and get our upcoming Bespoke Report 2020 Market Outlook and Investor Toolkit. 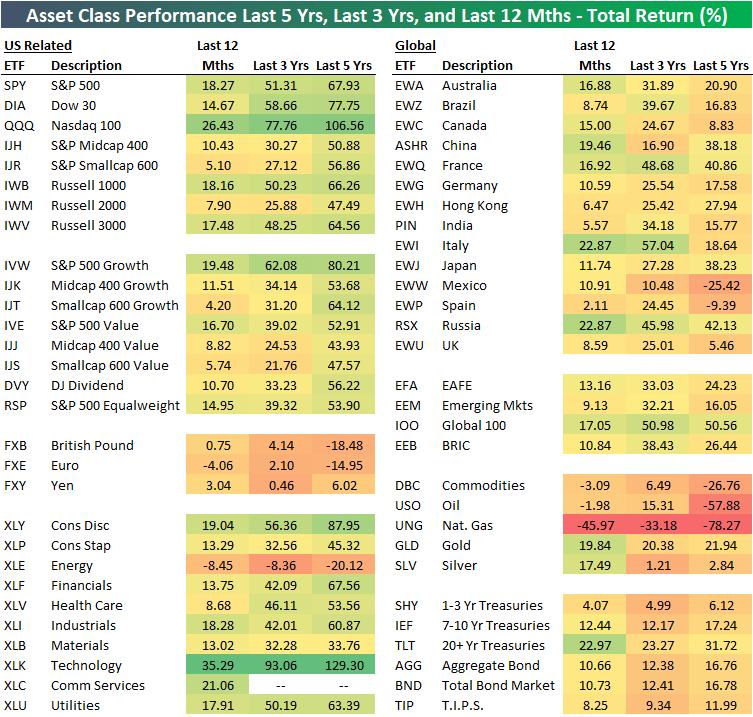