It has now been 14 years since Lehman Brothers’ last day as a solvent company – an event that set off one of the biggest market meltdowns of all time.  In hindsight, the events leading up to and after September 2008 may not seem all that bad.  How quickly we forget.  Three-quarters of a century removed from the Great Depression, most Americans had never given a second thought to the safety of the funds in their savings account or even money-market funds, but shortly after Lehman, these were legitimate concerns on the part of all Americans.  People were actually going to ATMs and taking out extra cash to literally put ‘under their mattress’ just in case they woke up and the ATMs weren’t working anymore.

Most of these extremes came after the Lehman bankruptcy, but the period leading up to Lehman wasn’t a picnic either; that’s actually why Lehman went belly-up.  From the S&P 500’s peak in October 2007 through 9/12/08, the S&P 500 was down over 20%.  But after an early summer sell-off, the S&P 500 rallied from mid-July to mid-August before selling off into Labor Day.  Heading into the weekend after Labor Day, the S&P 500 was down 4% from its mid-August high but appeared to be stabilizing at a higher low relative to July. With the S&P 500 still down 20% from its all-time high, you couldn’t have faulted someone heading into the weekend for thinking “maybe I’ll try to buy something on sale.” 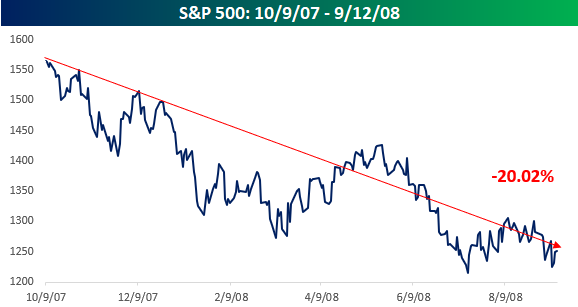 On 9/12/08, stocks may have been on sale relative to the October 2007 highs, but any buys on that day would quickly go down as one of the ‘worst trades ever.’  After Lehman announced its bankruptcy that weekend, cracks spread all over the financial district from a Wall Street parched of liquidity.  September ended with a decline of nearly 10% but continued to get worse from there, and by the following March, the S&P 500 was down just under 46% – or 71% annualized – from its ‘pre-Lehman’ close’.  Stocks that seemed cheap less than six months earlier were now down by nearly half, so getting back to even from there would pretty much require a double. Speaking from experience, any investor who bought any stocks in those six months quickly felt like the stupidest investor in the world. 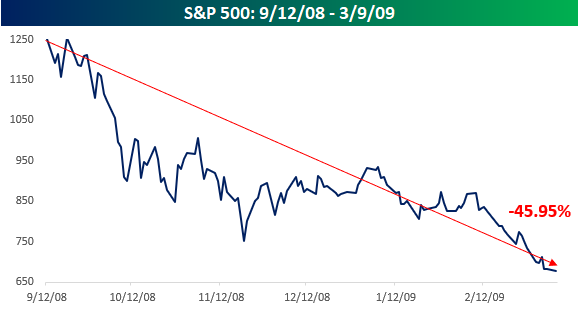 While any equity purchases made 14 years ago just before Lehman collapsed quickly turned into some of the worst trades ever, time is an investor’s best friend.  Anyone who had time gradually looked less foolish. From a longer-term perspective, the decline from September 2008 to March 2009 still looks painful, but over time, the market (as it has to this point always done) dug itself out of its hole. The snowball effect of compounding has rewarded investors who were in it for the long haul.  Not including dividends, the S&P 500 has rallied more than 228% since the Friday before Lehman’s bankruptcy, and including dividends, it has delivered an annualized return of more than 11%.  You’d probably sign the bottom line as fast as you could for an annualized return of 11% between now and 2036!

Not bad for what seemed like the “worst trade ever” at the time.  Click here to learn more about Bespoke’s premium stock market research service. 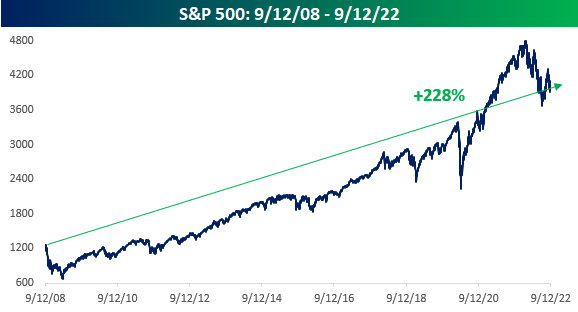