100 days ago today on March 11th, the WHO made it official and declared the COVID-19 outbreak a pandemic. Markets were already under a lot of pressure before the WHO declared the pandemic, but the 100 days since will probably go down as some of the craziest 100 days we’ll ever experience, not only in the market but in general society as well.  More than enough ink and pixels have been spent discussing the societal impact at large, so we’ll spare you and just focus on the markets.

While much of the declines were already in the rearview mirror by the time the WHO made its announcement, equities still had a steep decline in the immediate aftermath.  The large-cap Russell 1000, for example, fell another 19% to its March 23rd closing low, but after the rebound, the net change since the pandemic was officially declared has been a gain of 14.3%. 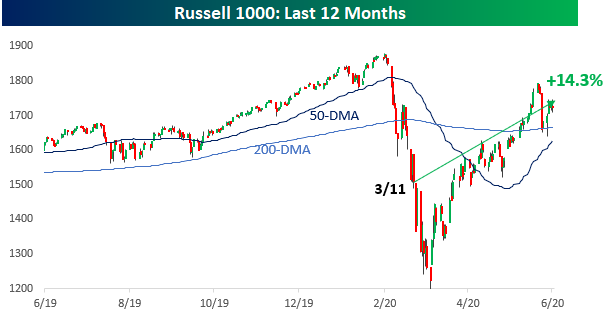 As impressive as the Russell 1000’s gain has been in the face of the global pandemic, many stocks have done a lot better than that.  The table below lists the 25 stocks in the index that have seen the biggest gains so far during this pandemic.  Topping the list is Wayfair (W) which has rallied more than 350%.  If there is one thing Americans must have realized while they were stuck at home under lockdown it was that they needed some new furniture!  Behind Wayfair, two other stocks have more than tripled and both were beaten down stocks from the Energy sector that were trading at less than $2 per share on March 11th.  A number of familiar names standout including Moderna (MRNA), Twilio (TWLO), DocuSign (DOCU), Beyond Meat (BYND), and Etsy (ETSY), but looking through the list, there’s really a diverse group of names ranging from bombed-out stocks from the Energy sector (8 stocks), Consumer names (7 stocks), and the ever-popular software stocks from the Technology sector (6 stocks).  It’s definitely been a rocky road for the markets over the last 100 days, but for anyone who had these names in their portfolio, they aren’t complaining. Click here to view Bespoke’s premium membership options for access to our weekly Bespoke Report which includes an update to our Stocks for the COVID economy portfolio that was released on March 11th. 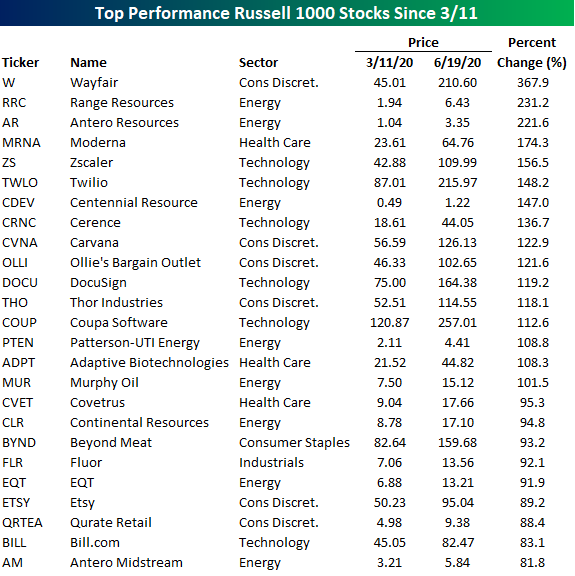